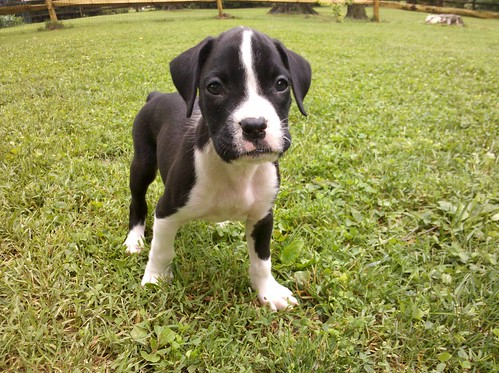 SoÂ in my last post, I told the story of how Bauser came to be a part of the family, and how my mom and I built a fence so he could run and play in the yard. Â The project went really well, and Bauser definitely loves having full run of the place, but after a few weeks it became obvious that I could never play fetch and toss and tug-of-war enough to keep up with his youthful energy. Â And neither could my kitties. Â Though they have adjusted pretty well to Bauser, they definitely aren’t interested in wrestling with a big dog.Â  Â (Except for Lucy, theyÂ are pretty old gatos at this point – all older then 10, Bandit is blind, and Alex is going to be 19!)

After much consideration, I decided that Bauser would probably be happier with a canine companion who could keep up with his rough-and-tumble ways, and started watching the free puppy ads to see what was available. Â I also decided I definitely wanted a very young puppy because, though I love Bauser and think he’s adjusting pretty well, I also hated not knowing where he came from and what kind of experiences he had before he came into my life. Â It’s far more difficult to correct bad behaviors that have set in than it is to train a pup properly from the start, and even after 8 months, there are still certain situations where I’m not sure if I trust Bauser’s reactions. Â I think when you raise a dog from the start, you have a deeper understanding of their psychology and can better work with them to make sure they grow up to be well socialized and happy dogs. Â Finally, I also wanted a dog that would be about the same size as Bauser, and definitely a female so we didn’t have any aggressive male competition going on.

A Boxer like Bauser, the second she saw him, I mean the very very second she laid eyes on him, it was all over. Â She didn’t seem to notice the predatory glare as he eyed this new critter in his home, she simply wanted to lick his face off. 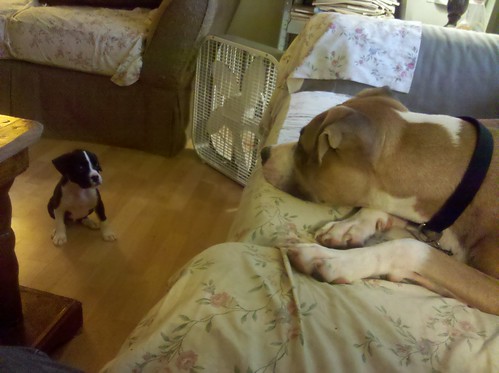 Bauser is not at all sure about this creature in the house.

The first hour or so was pretty tense. Â Indy was seemingly oblivious to Bauser’s angst and wanted to play straight away, and he didn’t seem sure if he should eat her for lunch or try to play back. Â He definitely wanted to sniff her out good, and it was a little difficult to hang onto her so he could without her chewing his ears off. Â He seemed very perplexed about the whole thing, and excited, and a little freaked out. 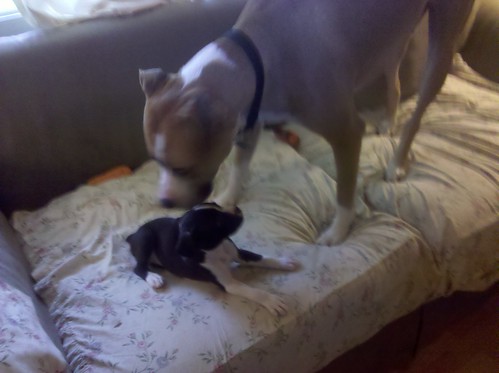 Sniffing out the new puppy.

I was a little afraid it would take weeks for Bauser to adjust, but after the first hour or two, when he realized she wasn’t a threat and that she liked to play, he seemed to relax and in no time at all Indy became a part of the pack. Â She climbed on his head, she chased his tail, she licked his nose, she playfully tossed her blanket around, and I think she charmed his socks off. 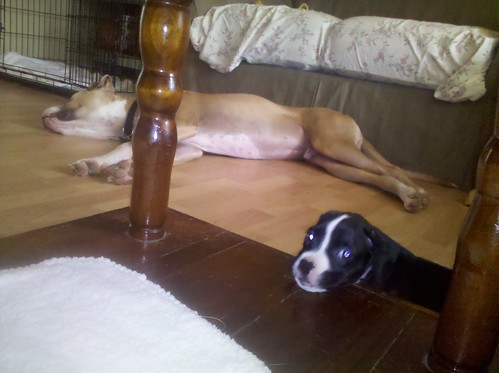 Bauser passed out from all the excitement.

The next day, you’d think Indy had been here all along. Â I don’t know if I ever truly knew what the expression “Followed him around like a puppy dog” meant until I saw Bauser and Indy together. Â It is the cutest, most adorable thing I ever saw. Â Wherever he goes, she is hot on his heels, if he lays down, she does, if he gets up, she does, if he gets a drink of water, she does. 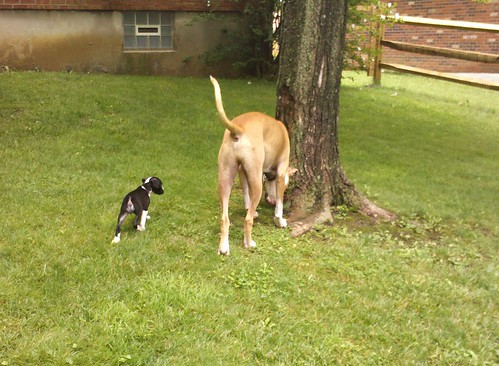 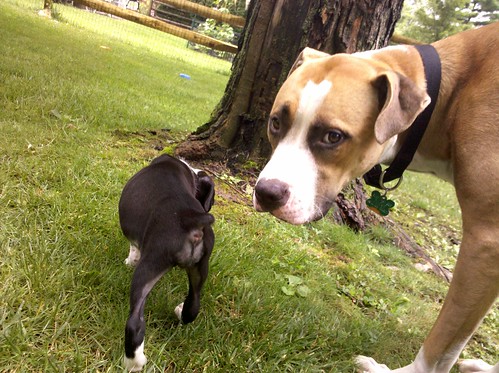 Checking out the maple tree… 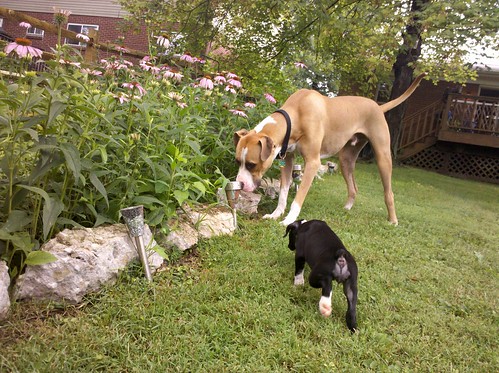 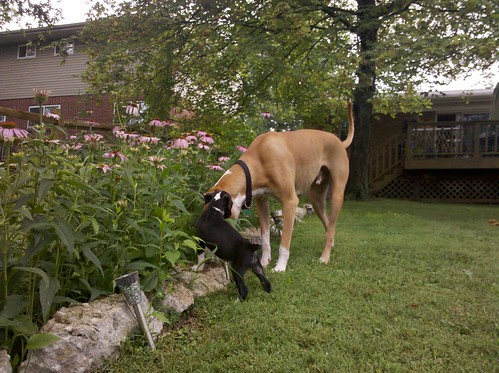 Checking out the garden… 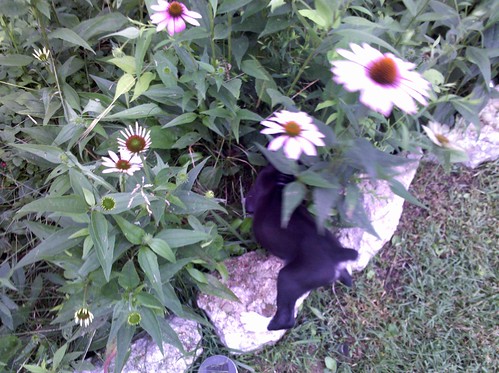 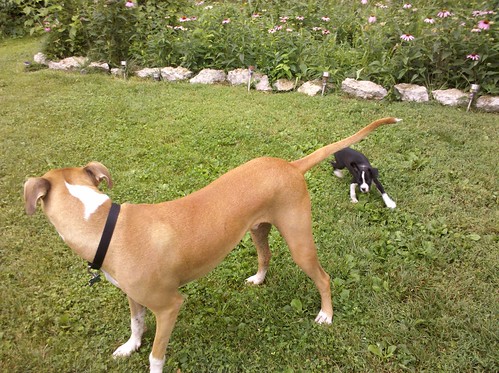 Feeling playful, if only you could hear her tiny ferocious bark! 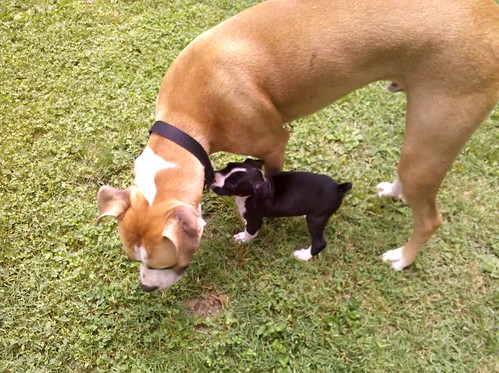 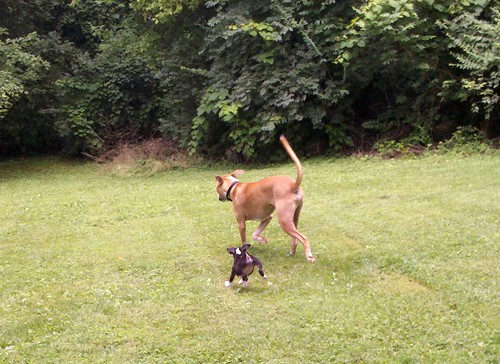 Tearing down the hill together at top speed. 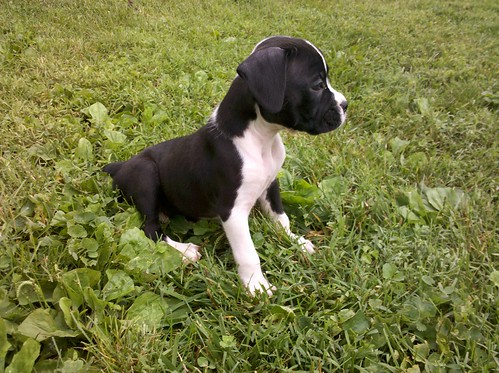 Watching Bauser come back up the hill. 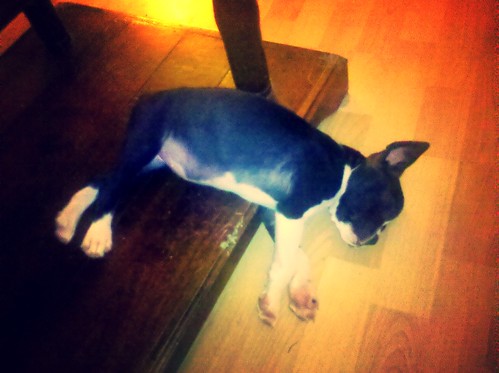 Crashed half on, half off the coffee table after a long day of play.

All in all, I think Bauser and Indy are going to be the best of friends, and when she gets a little bigger, hopefully they will have a lifetime of playing together, too. Â 🙂

This entry was posted on Sunday, July 7th, 2013 at 9:40 am and is filed under Deep Thoughts, Family. You can follow any comments to this entry through the RSS 2.0 feed. Both comments and pings are currently closed.