It’s a chilly Saturday morning in November, and I’ve got three whole days off with no plans, no social commitments, and no agenda other than cleaning house this weekend.Â  It feels marvelous to have a stretch of free time after a very busy few months.

It’s been a long time since I posted about work related things on my personal blog, but we have had several big accomplishments to celebrate the past few weeks!

Creation of the University of Cincinnati Staff Senate

The first is the creation of a university-wide Staff Senate.Â  On October 16th, the UC Board of Trustees approved a resolution to create a Staff Senate to give staff a formal voice in the university’s governance process, and I was honored and excited to be involved in the process.Â  It took nearly two years to shepherd the idea from start to finish, and though I only played a minor role in the beginning, I’ve been very involved since the start of 2018 helping draft the bylaws and advocating for the Senate to university leadership. Smiling at the Board of Trustees meeting when the resolution finally passed!Â Â Photo: Joseph Fuqua II/UC Creative Services

When the resolution passed as few weeks ago, it felt like such an accomplishment to give the employees of the university a voice.Â  As someone who has worked at UC for going on 20 years, it has always seemed like an oversight that faculty and student governance groups were represented at the decision-making table, but staff were not.Â  I hope that the creation of a Staff Senate doesn’t add yet another bureaucratic layer to the already complex decision-making process, but instead becomes a a useful forum for staff to share their institutional knowledge and expertise with the other governance bodies on campus.

Posing for a picture with some of the other members of the Staff Senate Advisory Committee.Â Â Photo: Joseph Fuqua II/UC Creative Services

I’m sure more hard work lies ahead, butÂ I feel proud of our team for persevering and working so well together, and I’m looking forward to the next chapter to get this thing off the ground and running well.Â  I hope we get lots of participation from around campus in 2019!

Another huge project that has been a main focus of our work at the UCSIM | Center for Simulations & Virtual Environments Research this year has been the development of theÂ Bicentennial Virtual Reality Experience that will launch in January 2019 to celebrate the university’s 200th anniversary. 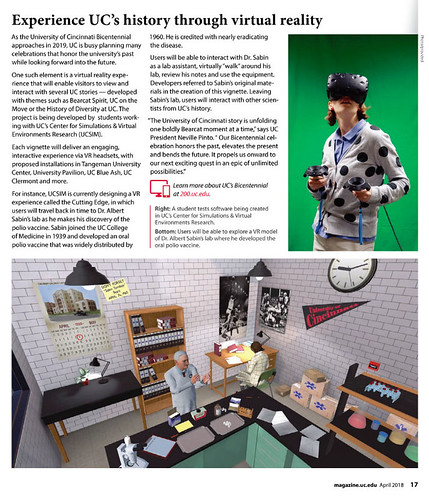 The Bicentennial Virtual Reality Experience will allow visitors to go back into “signature moments” in the university’s history through five episodes, or vignettes, celebrating the history of research, the classroom experience, our Bearcat Spirit, the struggle for diversity and inclusion, and the changing architecture of the university.

It’s been a tremendous opportunity for our team to work with so many historians, experts, and university departments throughout the development process.Â  We are super excited to wrap up development and prepare for the VR exhibit launch in the coming months!Â  Stay tuned and check out all the upcoming Bicentennial events planned for 2019.

A New Grant Award with the College of Nursing

Lastly, just as the week was ending on Friday, we received notice that a grant proposal submitted by the UC College of Nursing to create VR simulations with UCSIM was funded!Â  I can’t even find any announcements or news on theÂ Ohio Colleges of Medicine Government Resource Center website yet, but the Medicaid Technical Assistance and Policy Program Providers as Allies in Equity and Care RFA called for applications to create virtual reality experiences and patient simulations for Medicaid providers.

The goal of the grant is to advance, “..health equity for the Medicaid population by increasing Medicaid provider cultural competency and awareness of implicit bias. This will be accomplished through training composed of virtual reality and simulated patient experiences that will include direct interpersonal feedback related to the interaction of patients and families in a variety of challenging circumstances.”

This will be a major project through the rest of the academic year, and I’m excited to work with our partners in the College of Nursing and College of Medicine in the coming months.Â  What a terrific way to end the week before we headed off for a 3-day weekend!

With all of these exciting developments at work, it’s been a hectic fall semester for me and the whole UCSIM team.Â  I hope everyone is enjoying our long weekend off and staying warm as the leaves fall around us.Â  The next few weeks will be a sprint to finish things before the holiday season, but we’ve had many great accomplishments to celebrate in 2018!

How Do We “Immunize” Society Against Technology Futures We DON’T Want?

Recently The Guardian published an interesting critique of the TED Talks series by Benjamin Bratton that I’ve been thinking about since I read it. Â  The piece asks what good does it do for TED to take extremely complex topics and boil them down into 20 minute presentations, which are viewed as infotainment by a certain segment of people, and then not much gets done about the issues being discussed. Â I think it’s an interesting critique, and as someone who organizes technology conferences, I often worry that if we all just come and do a lot of talking and not much afterwards, what purpose has the conference really served? Â I’d be interested to hear others’ thoughts.

Beyond the critique of TED Talks, however, there were two lines in particular that really struck me:

Because, if a problem is in fact endemic to a system, then the exponential effects ofÂ Moore’s lawÂ also serve to amplify what’s broken.

And the concept of not just innovating but also “immunizing” society:

The potential for these technologies are both wonderful and horrifyingÂ at the same time, and to make them serve good futures, design as “innovation” just isn’t a strong enough idea by itself. We need to talk more about design as “immunisation,” actively preventing certain potential “innovations” that we do not want from happening.

Regarding the exponential effects of Moore’s Law, I’ve written before that I think our public institutions (government, academia, social structures) aren’t just failing to keep pace with changes in technology, but that the technology itself is amplifying their (our) failures. Â Wherever a gap existed before the information age, now it’s becoming a gulf (think income disparity, socio-economic mobility, access to real political power).

Whatever minor systemic failures or bureaucratic quagmires that crept in during the industrial age are turning into full-blown catastrophic disasters in the information age. See the US Congress or our public education system for stark examples, both represent not just a failure to adapt to a changing world, but technology is also amplifying the ills inherent in those systems with truly catastrophic results – a congress that has gone from dysfunctional to not functional at all, and a public school system that is failing the very students it was designed to help – the poor, the underserved, the first-generation students.

We talk and read about “disruptive innovation” every day in the tech and business press, but often its in the context of “creative destruction” as some new business model or product displaces an old one, and in general that’s seen as a positive outcome in a “free” market system. Â But for public systems and institutions, those public goods that have no profit or market incentive, this amplification of the broken is really very scary to me and I am not at all convinced that privatization of public systems is the answer (which is why I don’t support charter schools or for-profit education businesses, no matter how innovative they promise to be – MOOCx blah blah blah).

The most important things in life can’t be quantified in dollars and we can’t “innovate” a business model or technology solution that changes that basic fact.

So where does that leave us? Â I’m not sure, but I’m intrigued by Bratton’s concept of “immunizing” society against the futures we don’t want, and I’m wondering just how we might go about doing that. Â Bratton says:

Problems are not “puzzles” to be solved. That metaphor assumes that all the necessary pieces are already on the table, they just need to be rearranged and reprogrammed. It’s not true. Â “Innovation” defined as moving the pieces around and adding more processing power is not some Big Idea that will disrupt a broken status quo: that precisely is the broken status quo.

.. and I’m inclined to agree. Â I think those of us who consider ourselves technology evangelists and futurists need to think long and hard about these questions.

As a practical step, perhaps one way to help “immunize” society against the technology futures we don’t want would be to make sure that every talk we give, every presentation, every slide deck (or Prezi or whatever), every workshop has a section about possible NEGATIVE outcomes of the technology we’re talking about, and what we could or should do to avoid it? Â If we’re going to spread the word about new tech, don’t we have a responsibility to also discuss the possible negative effects?Â Perhaps as conference organizers and workshop planners, we need to include not just positive visioning, activities, and keynotes, but Â sessions that specifically talk about the possible negative outcomes?

I’m not sure, but it’s something I’m thinking about and want to keep in mind.

Culture is about power dynamics, unspoken priorities and beliefs, mythologies, conflicts, enforcement of social norms, creation of in/out groups and distribution of wealth and control inside companies. Culture is usually ugly. It is as much about the inevitable brokenness and dysfunction of teams as it is about their accomplishments. Culture is exceedingly difficult to talk about honestly.

Read the full post, which is about startup culture, but I thought this paragraph was very insightful and applicable across organization types.